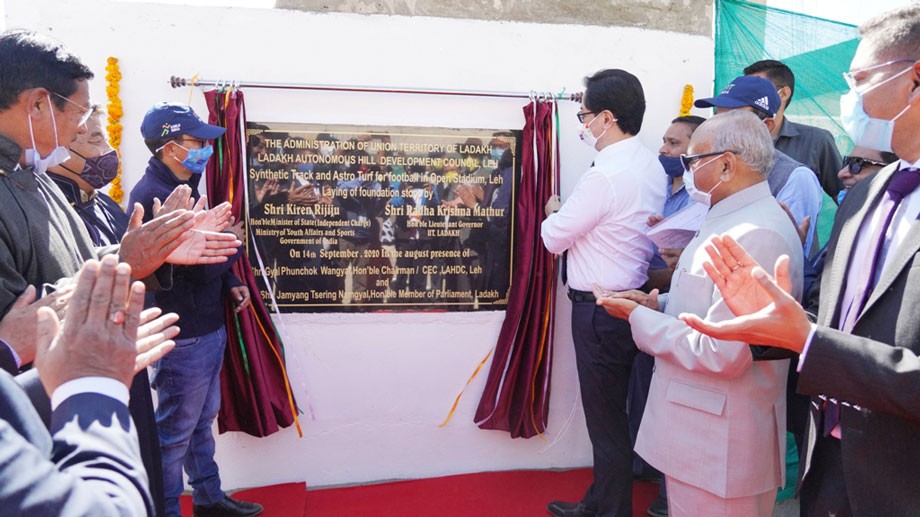 Kiren Rijiju, Union Minister of State, Ministry of Youth Affairs in presence of Lieutenant Governor, R K Mathur laid the foundation stone of synthetic track and Astroturf for football in Open Stadium, near Spituk and Gymnasium Hall at NDS, Stadium on September 14.

Kiren Rijiju expressed happiness over the fulfillment of his commitment and congratulated the people of Ladakh for the sports facilities being made available for them. He appreciated the great teamwork exhibited by UT Administration, Hill Council, local administration, and the people of Ladakh in getting these facilities with a targeted implementing time of 8-9 months.

He credited the visionary leadership of Prime Minister Narendra Modi in giving a new identity to Ladakh in the form of UT status.

Talking about Fit India Movement initiated by PM Modi, he stressed the need to raise awareness in society on sports for fitness and developing a sports culture with interstate sports exchange programmes.
Kiren Rijiju announced relaxation to Ladakh and the establishment of region-wise Khelo India Centers. He asserted that sport is a soft power to uphold national integration and the union government is committed to promoting world-class sports infrastructure in Ladakh. Also, he informed that as demanded by the representatives of UT Ladakh, Ice hockey will soon be recognized by the National Sports Federation and separate funds will be allocated to promote the game to an international standard.

He further added that talented youths in different sports can be selected for training at the national level and said that Ladakh has the potential to become the sporting a powerhouse of India.

Lieutenant Governor thanked Rijiju for keeping his commitment and fulfilling the requests made. He said that these sports facilities will be of great benefit to society and stressed on making it operational at the earliest. He praised the society for maintaining good health and producing national and international winners in different sports. He said that there is a huge potential in Ladakhi sportspersons to participate in the winter Olympics and earn laurels for India.

R K Mathur informed that under Special Development Package with assistance from Sports Ministry, Ice Hockey facilities with mini stadiums will be provided at district, sub-division, and block level in Ladakh. He urged the Minister to earmark a calendar for high altitude training to national sportspersons in Ladakh that would inter alia help the Ladakhi sportspersons to improve their sporting standards.

Later, sports kits under Khelo India were also presented to the sportspersons.