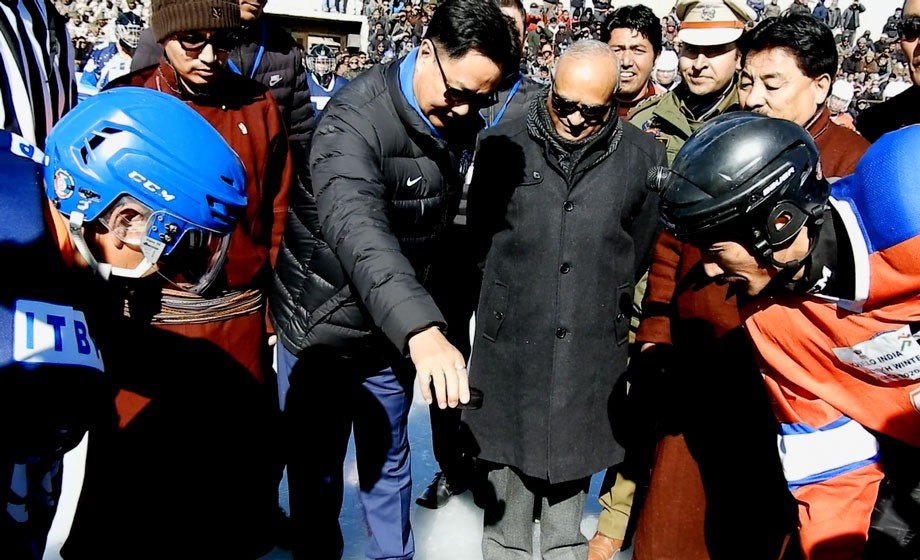 The winter game was organised by Department of Youth services and sports and Administration of UT Ladakh in collaboration with Ministry of Youth Services and Sports, Govt. of India.

The opening match was played between ITBP and Ladakh Scout, Red team. ITBP won the match by 2-0 goals.

Addressing the gathering, Kiren Rijiju appreciated the skill of the players and expressed the importance of having proper infrastructure to take ice hockey at the next level. He said that the ministry will work on developing standard infrastructure facilities to all the talented players. He also stressed on exploring and promoting different other sports in the region.

Talking about the recognition of the sport Ice Hockey, he assured to get the sport recognised so that the players will get financial aid along with many other facilities. He said that in the coming days we will be able to have champions representing in Olympic games also.
He also informed various other plans and initiatives of the Government of India to boost the sports sector.

The Khelo India Ladakh Winter Games will feature an open ice hockey championship, figure skating and speed skating. The competition will be conducted at the block, district and UT levels. About 1700 athletes of different ages, from Leh and Kargil districts of Ladakh, will compete.

R K Mathur expressed his hope that under the leadership of Kiren Rijiju, the sports sector in Ladakh will be developed and promoted at a great level. He also highlighted the scope of adventure sports in Ladakh.