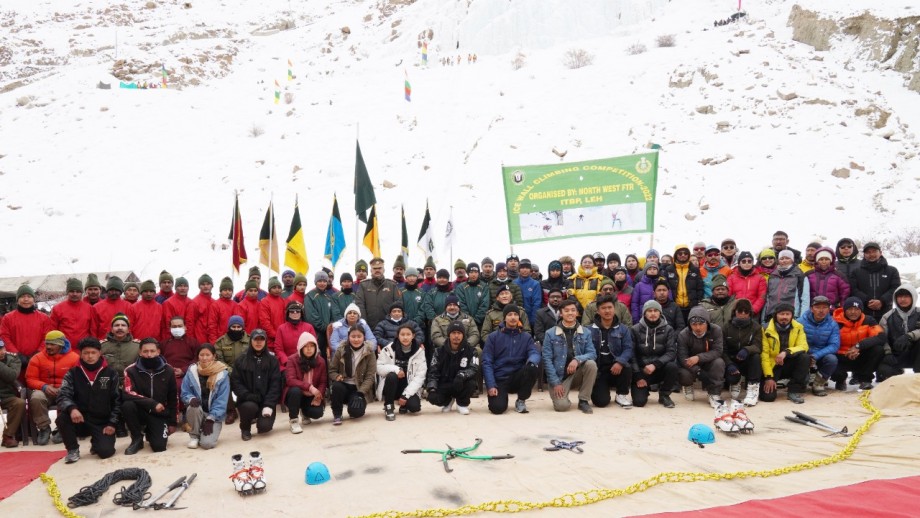 During the inaugural ceremony of the two days Ice wall climbing competition-2022 at Gangles .
Leh :

Chief guest of the occasion, Lieutenant Governor of Ladakh, RK Mathur congratulated ITBP and LGMA for taking the initiative. He stressed the need for a collective effort from all organisations, including armed forces and civilians, to organise this event at a grand scale.

LG Mathur said that events such as skiing, ropeway, snow sculpture, walking and marathon on ice have the potential to make Ladakh a top winter destination for tourists. He also stated that the adventure activities taken up by Ladakh Police and ITBP such as Chadar trek and rafting will strengthen their capacities to serve the people of Ladakh and help tourists. He stressed on the need for comprehensive infrastructure to make adventure sports safe, attractive and popular among tourists. This may include safety of sports, medical help, medical evacuation, etc.

Inspector General, North-West Frontier of ITBP, Lhari Dorjee Lhatoo stated that the objective of the competition is to attract international participants and also prepare athletes who could represent India at Winter Olympics. He further stated that these events would boost winter tourism and enable Ladakh to become a hub for winter activities.

The ITBP and LMGA teams gave a demonstration of ice wall climbing and medical rescue. 13 teams are taking part in the two-day competition in which lead and speed events would be held.