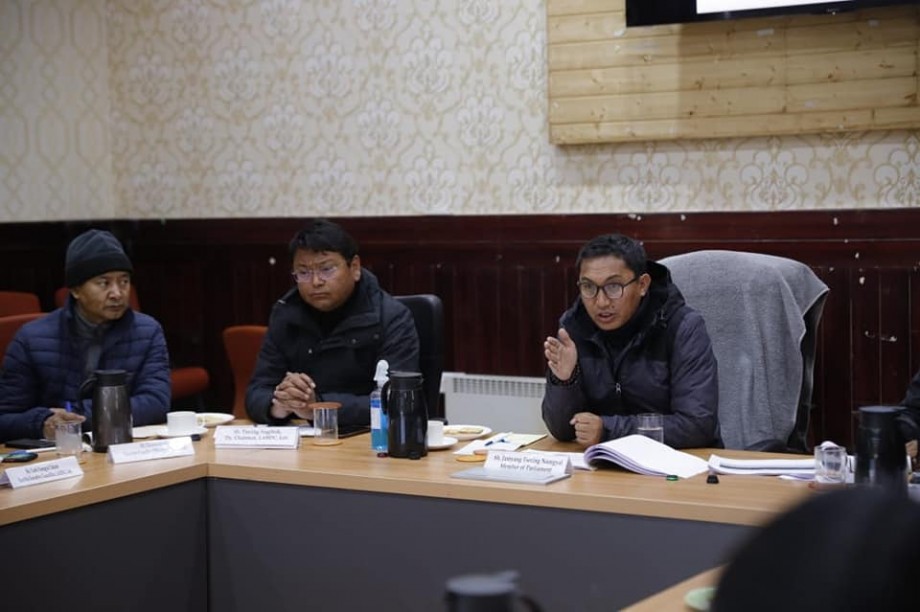 MP, Ladakh, Jamyang Tsering Namgyal, who is also the Chairman of the District Development Coordination and Monitoring Committee (DISHA), reviewed the status of financial and physical progress in the implementation of various Centrally Sponsored Schemes in the Leh district on November 23.

Chairman DISHA reviewed departmental-wise execution and achievements of works regarding the implementation of Centrally Sponsored Schemes. Stressing early implementation of all the CSSs in the region, he directed the heads of various departments to ensure that CSSs under their purview in consonance with DISHA guidelines are exercised at the earliest.

Chairman DISHA exhorted the officers to routinely and dedicatedly follow up on the progress under CSSs where interventions are required at the District and UT Levels and assured to intervene at the Ministerial level for the smooth execution of languishing projects.

Reviewing the progress under National Rural Livelihood Mission and National Urban Livelihood Mission, Chairman DISHA directed the concerned officers to submit an assessment report on the output of the schemes among the beneficiaries in terms of enhancement in their livelihood.

Similarly, regarding key schemes of the Agricultural department, such as Pradhan Mantri Fasal Beema Yojana, he directed the officer to ensure that the scheme is positively implemented from the next sowing season so that the farmers are insured against crop damages. Chairman DISHA also directed the officials of the Social Welfare Department to assure that the pending beneficiaries under welfare schemes are covered soonest and to submit a report for the same.

The Assistant Commissioner Labour, Leh was asked to look into the matters of prevalent exploitation of the labourers hired by the BRO and other engineering wings, along with the hiring agencies, to ensure that labourers are provided with a sense of dignity of labour and prevented from any occupational hazards. He also instructed for registration of the local porters and labourers engaged with the army at various locations.

ACL, Leh informed that regulatory laws regarding the regulation of labour agencies are being drafted at the UT level and stressed the need for an early constitution of the Labour Board.

Regarding the progress under Jal Jeevan Mission, Chairman DISHA lauded the recent achievement of both Leh and Kargil districts as per reports of Jal Jeevan Survekshan. He directed Superintending Engineer, PHE Department, Leh to ensure that JJM works in all villages are not hindered due to petty reasons when involved departments are ready to execute the work.

He urged the officers to identify the challenges and issues faced in the implementation of the schemes and to highlight them in the district-level DISHA meetings so that solutions could be framed and deliberated further during the UT-level DISHA meetings.