MP Ladakh alleges for 'misbehaving' with Zanskar Student Union, President Neither I abused nor ask to charge FIR against the student president, says MP 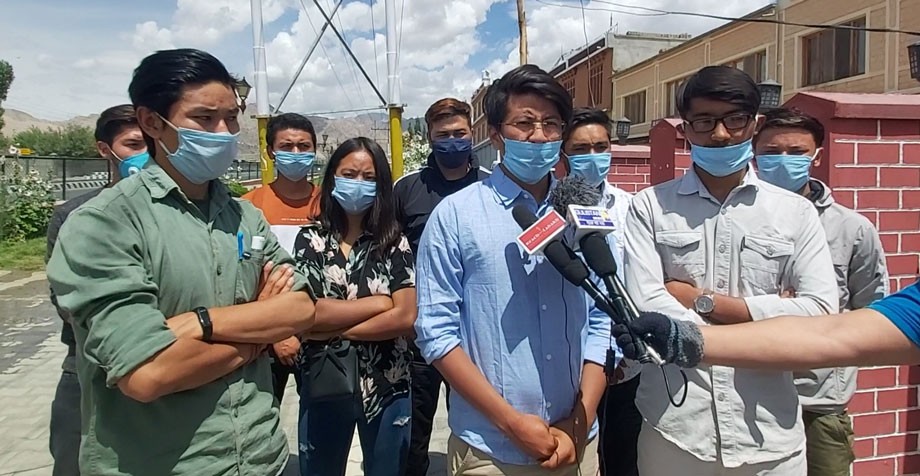 Student representatives while interacting with the media on the issue.
Leh :

Member of Parliament Ladakh Jamyang Tsering Namgyal, who also holds the post of president, BJ Ladakh, has stirred up a controversy as the president of All Zanskar Student Association, Lobzang Paldan, alleged that the former misbehaved with him on July 29 at the Dak Bungalow in Padum at Zanskar.

Lobzang alleged that he along with some other executive members of the Zanskar student association went to meet the MP Ladakh with a copy of the memorandum at the Dak Bungalow.

“The MP was in a meeting with the head of departments. We requested the SHO to allow us to meet him with our demands. Once we got the permission from him, we went inside the room. Once the meeting was over, I introduced myself and started to talk to him, but he asked howwas allowed to come inside. He didn’t even listen to us and walked outside,” he said.

Lobzang said that he felt embarrassed and anguished over the lackadaisical attitude of the MP Ladakh. “I requested him to listen to our demands and grievances since he is the elected representative of Ladakh. Then, some party workers approached him and told us to meet the MP in another room,” added Lobzang.

“Once we went inside the other room, he started abusing me and threatened to put me in police custody. He also said that he would lodge an FIR against me. I was anguished and raised my voice. However, his PSO kicked me and then the SHO slapped me”, he added.

In the copy of the memorandum, the students raised the issue of J&K bank recruitment, internet connectivity, delay in declaration of DSSRB result, LAHDC Kargil, transfer of COVID-19 positive patient in GREEF to their respective places, and the early completion of Nimoo-Padum-Darcha road.

When we got in touch with the MP Ladakh, he refuted the allegations and said that he neither abused nor threaten to lodge FIR against the student president.

“The student union broke the protocol by appearing in the meeting hall where an important meeting was taking place between me and the HODs. I told him that I would listen to him once the meeting is over but he repeatedly insisted on talking about it in front of the HODs. He started misbehaving and spoke rudely to me,” he said.

“I understand that since he is young, mistakes do happen. Thus, I tried to make him understand but he refused and was adamant. So, I asked him to go out and asked my PSO to take him out but he continued to misbehave with everyone,” he added.

Meanwhile, Stanzin Tsedup, President, Lungnak Volunteer Student, President released a video on social media saying that the issue was not so big to be highlighted everywhere; the whole incident was exaggerated and hyped.

Jamyang stated that the opposition would be more effective if they showed concern towards developmental and social issues, and concerns rather than playing politics on such issues.