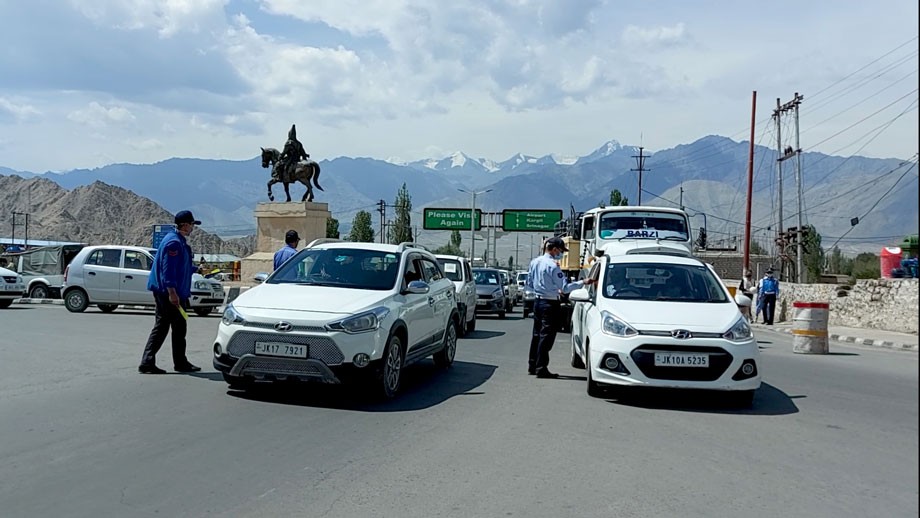 Ladakh Traffic Police distributed pamphlets among the commuters to make them aware of the traffic rules, regulations, and new Motor vehicle Amendment Act, 2019, and increased fines.

SP Traffic Ladakh, Mohd Rafi Giri along with DYSP Traffic, Regzin Sandup, and traffic cops of Leh carried out the awareness drive on August 18 at Petrol Pump Chowk. The awareness campaign will continue for one week.

The main aim of the campaign is to aware people of the traffic laws and rules to strictly follow them.

Also, the commuters were advised to follow the COVID-19 standard SOPs issued by District Magistrate, Leh, and to use face masks to contain the spread of COVID-19.

M R Giri said that the initiative is carried out to make the people aware of the traffic rules and regulations to make a smooth traffic system in Ladakh.

“We have to distribute around 5000 pamphlets among the commuters of both Leh and Kargil. The pamphlets have the information of the region, Do’s and Don’ts for the motorist/ pedestrians, new motor Vehicle Amendment Act 2019, and increased fines and also the important phone numbers in case of any emergency help”, he added.

Imprisonment for severe crimes is also included in the Act such as ₹25,000-fine and three years’ imprisonment if the owner/ guardian allows a juvenile to drive a motor vehicle. The juvenile would be tried under the Juvenile Justice Act, 2000 and the registration of the motor vehicle will be canceled for a period of 12 months.  Using a cell phone while driving, ₹ 1000-5000 fine/ six to twelve months imprisonment. Also, the vehicle will be seized if driving without RC.