Ladakh Students' protest regarding Sixth Schedule continues After a 17-day study tour to north-east, we are firm on the need of Sixth Schedule for Ladakh, says President, SOUL 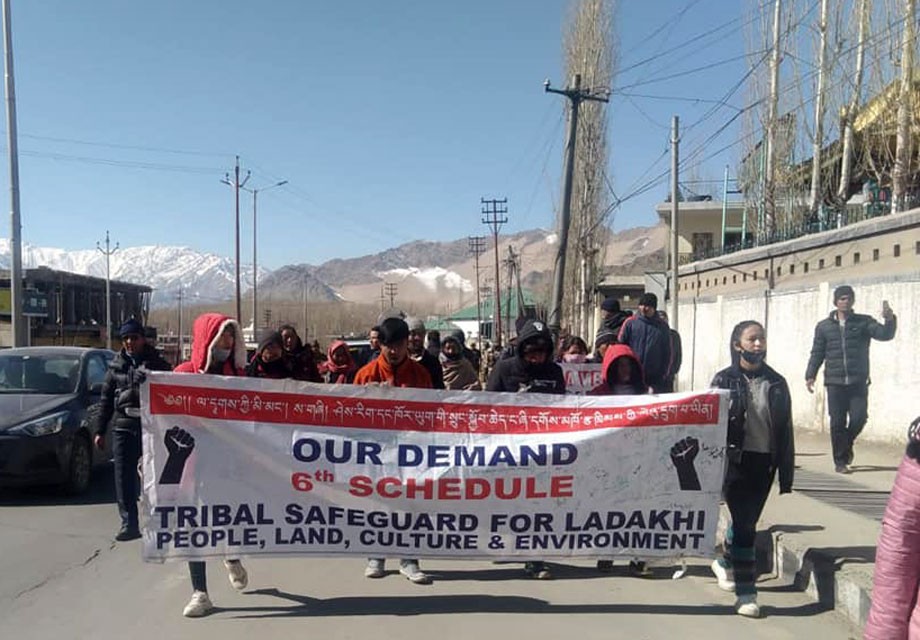 Yet again Ladakh student associations under the banner of Student Organisation for Unified Ladakh took out a peaceful protest rally demanding 6th schedule for Ladakh on February 10 from NDS ground till the main market, Leh.

Despite having so much of hues and cries over needed constitutional safeguards for Ladakh in terms of land, job, environment, culture and identity after the Union Territory status hardly anybody turned up in support of the students and joined the rally. Only around 10 students lead the rally.

Rigzin Dorjey, President SOUL with a great disappointment over the low participation of the people in the rally said, “We students are raising our voice and standing up for the future of Ladakh and expected participation at all levels for the cause. It is very disheartening to see such low turnout”.

He expressed the importance of every people of Ladakh to come under one umbrella and raise the demand for the sixth schedule for Ladakh.

Starting from December 12, students carried out a massive rally followed with a hunger strike demanding the sixth schedule for Ladakh.

Jamyang Tsering Namgyal, MP Ladakh visited the students sitting on a hunger strike on December 15 and after observing hunger strike for four days, they called off their protest for a time being on December 16 and carried out the protest. On January 18, District Administration sent presidents of the student union of Jammu, Nubra, LEAF, and SOUL for a study tour to northeast areas such as Bodoland and Meghalaya for 17 days. Citing security reason for the Republic day celebration, the tent of the students was removed by the administration on January 25 evening. According to the students, the officials asked them to relocate their tent on January 29 but since then students are finding difficulty to relocate their tent.

Students questioned District administration for not allowing them to relocate the tent for standing protest near Leh gate.

When asked about the allegation of students, Sachin Kumar Vaishya, DC, Leh said, “We are not against any peaceful protest but prior giving permission the administration has to ensure that no inconvenience is caused to the public. Students were adamant about the location of the standing protest which we feel is not suitable”.

“We are not against the students but before granting permission for a protest we need to ascertain the reports from all the field functionaries of the administration based on which the permission is granted," he added.

The right to protest peacefully is enshrined in the Indian Constitution—Article 19(1) (a) guarantees the freedom of speech and expression; Article 19(1)(b) assures citizens the right to assemble peaceably and without arms.

Stanzin Chosphel, President, Student Union Nubra also one among the member of the study group said, “The study tour to other six schedule areas of the northeastern states cleared many doubts. We learned about the situation of Bodoland, the loss of their language, culture and ethnic identity before any safeguard. Ladakh needs constitutional safeguards for better tomorrow.”

President SOUL said that the students are more firm about the need of the sixth schedule for Ladakh after the study tour.