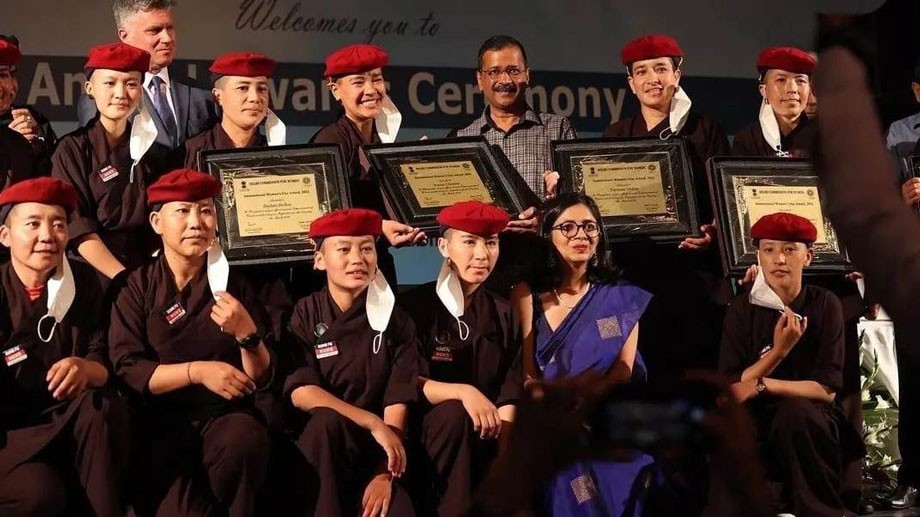 Delhi Commission for Women honoured Kung Fu Nuns with the International Women's Day Award in a ceremony at Stein Auditorium, Delhi on March 8.

The nuns were awarded for their extraordinary achievements in the field of women empowerment, disaster relief, environmental conservation and breaking societal barriers.

Jigmet Yangchan Ghamo, Kung Fu Nuns said, "We are honoured to be recognised for our efforts, and this award will help us spread our message of empowerment and further strengthen our mission to help women and girls to be their heroes.”

In 2016, the Delhi Commission for Women established the 'International Women's Day Awards' to honour inspirational people who have displayed untiring commitment towards the cause of women and girls. In the past, the Commission awarded several women officers from ISRO, Indian Air Force, Indian Army, Air India, BSF, CRPF women bike riders, public servants, sportspersons and other agents of change.

The Kung Fu Nuns teach martial arts to promote self-defence to young girls in their communities, where reporting violence against women is a rarity. Their 5,200-kilometres "Bicycle Yatra for Peace" from Nepal to Ladakh, India, took over three months, as they stopped in hundreds of villages for environmental education and to speak out against human trafficking. After the catastrophic Himalayan earthquakes of 2015, they refused evacuation to deliver critical aid to neglected regions. They run free health clinics, and to date, the nuns have helped restore sight to over 1,500 Himalayans. They also respond to calls for emergency animal rescue and have removed thousands of pounds of plastic litter.

The Kung Fu Nuns were Vaclav Havel Humanitarian Prize finalists in 2021, Asia Society's Game Changers recipients in 2019 and Atlantic Council’s Unsung Heroes in 2020. Last year, UNESCO International Centre for Martial Arts conferred their Martial Arts' Education Prize to the Kung Fu Nuns. In 2012, they performed at the Olympic Park before the Olympics in London, United Kingdom, upon invitation. Since then, they have performed in many places for thousands of people, and their exhibitions draw hundreds of thousands of spectators to their performances.