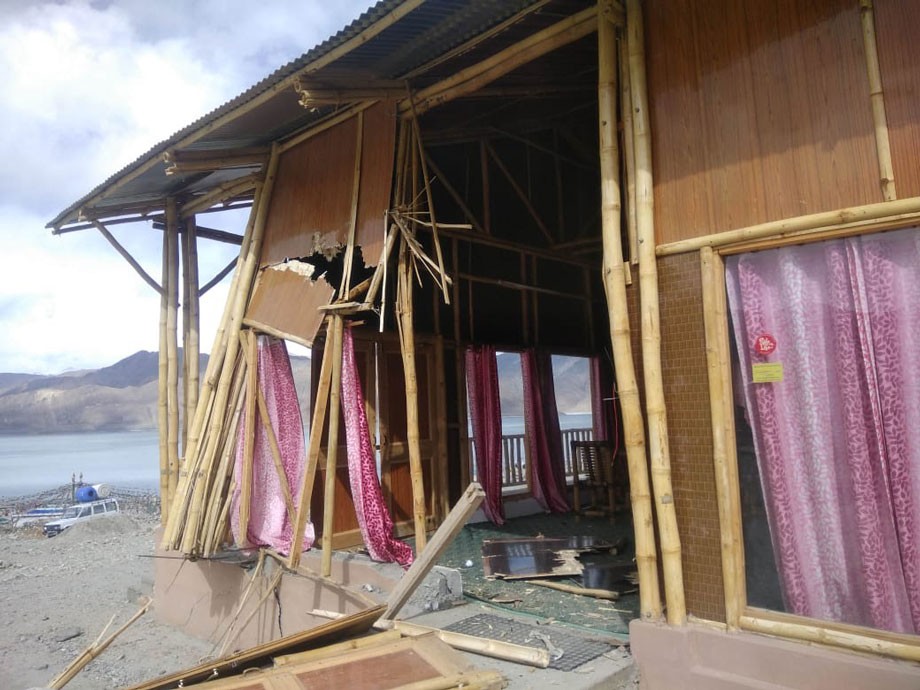 District administration, Leh has demolished commercial set up along the banks of Pangong Lake on April 10. In the year 2018, the J&K high court directed the district administration to remove all the illegal business establishments close to the lake to ensure 'sustainable tourism' in the area.

Showing resentment, the villagers of Spangmik marched towards the Sino-India border. However, the protestors were stopped by the army at the border personnel meeting point (BPM).

The Supreme Court had in 1987 declared the Pangong Lake area Changthang Cold Desert Wild Life Sanctuary and has issued strict instructions not to disturb the lake area.

Before demolishing the illegal structures, several notices were issued to the camp owners but they failed to follow the instructions of the government.

Ladakh has attracted more than 3 Lakh tourist in the year 2018 but due to lack of policy and regulation, it is creating a lot of problems.He questions that if Pangong area falls under Changthang Cold Desert Sanctuary and the business establishment is illegal than what about the commercial set ups in Tsomoriri lake and Nubra valley.While on the other hand, Tsewang Tharchin from Shayok a camp owner said, “I am the sole bread earner of my family and started my business in 2018 by taking a loan from the bank. Around 10 to 15 camps have just started in the year 2018 who have taken loans from different banks. We have a short earning season and it’s very difficult to reimburse the loans. The total investment to set up a camp cost around 25 to 35 Lakh for 10 rooms. Around 400-450 people get employment opportunities through these camps.”

Thinless Angchuk from Durbuk another camp owner said, “We have also put forward a proposal to manage garbage, construct proper sewerage system on our own expenditure and also to follow the rules and regulation framed by the administration but they didn’t agree.”

He further added, “District administration has issued notices few times but they have failed to provide an alternative solution to the problem.”

Reacting to the decision, the camp owners got a stay order from J&K High Court in September 2018.

On April 8, Sarpanches of five Halqa Panchayat submitted a letter to Avny Lavasa, DC demanding land for five halqas in Pangong to set up business.

The letter reads as, “We stakeholders of Durbuk Block including all Sarpanches, Councillors and Gobas welcome the administration decision over protection of Pangong valley's environment. Thereupon, we the Sarpanches of five Halqa Panchayat namely Tangtse, Durbuk, Shachukul, Kargyam and Chushul would like to highlight over the land allotment and our right for all Lalok's citizen to have economic related activities near Pangong Lake.”

Pangong Lake was first opened for tourist in the year 1994 and the business setup was initiated by the tourism department.