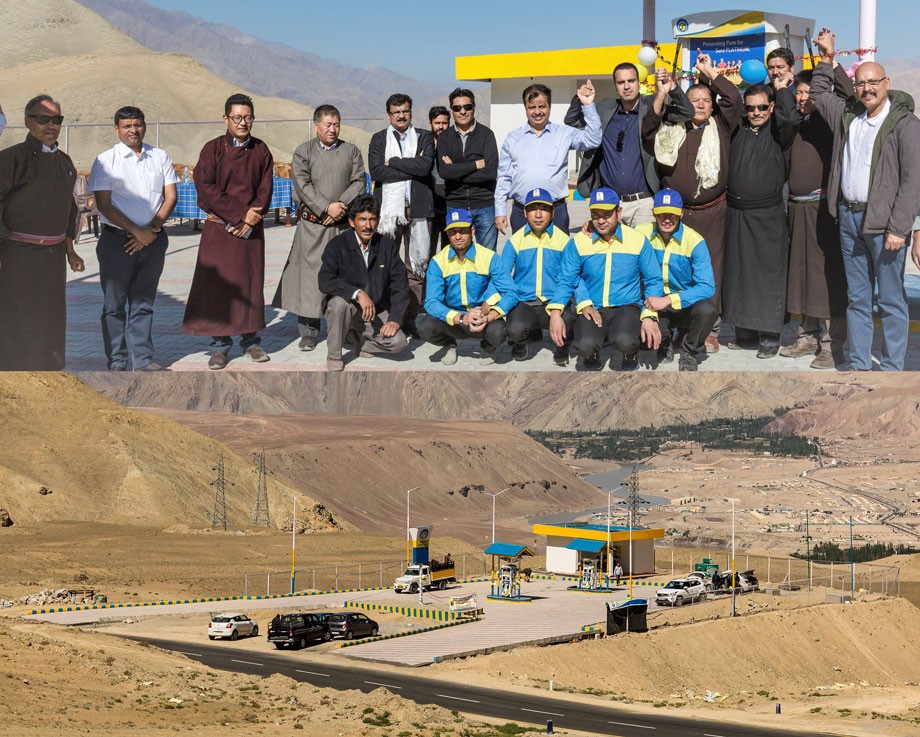 This fuel station is situated adjacent to Magnetic Hill and is part of the 2.5-acre complex in which company’s mini POL depot shall be constructed. The Letter of Intent to operate this RO was given in November 2017 to the Government’s Cooperative Department through the then Minister for Ladakh Affairs Chering Dorjey Lakrook for region’s development.

All the fixed investment of this 'Ladakh Cooperative Fuels' has been done by the company and working capital shall be invested by the operator’s M/S Bami Duniya Cooperative Consumer Society Ltd. of Leh.

During the opening of this Retail Outlet, all the trustees and managing committee members of the society were present in their traditional attire.

Surjeet Mahalik, BPCL’s head of the Northern Region before setting the fuel station in action interacted with the Deputy Registrar and other staff of the Cooperative Department in the presence of Mohit Bhatia, BPCL’s head for Punjab, Chandigarh and J&K. They also had an interaction session with Chering Dorjey, Ex-Minister for Ladakh Affairs, who had been instrumental in getting the land for this project through CEC, Hill Council, Leh.

Rajesh Sharma, Territory Manager of BPCL for J&K said that getting company’s breakthrough in Ladakh region was his fifth and final big vision focus area, accomplishment of many more new Retail Outlets in the pipeline in the twin districts of Leh and Kargil was part of the focus area. In his interaction with the Divisional Commissioner Ladakh Saugat Biswas on September 14, he briefed the plans of the company towards development of Ladakh region and assured him of doing some CSR activities in line with BPCL’s earlier extension of Rs. 10 Lac towards the construction of community toilets under its CSR initiative in 2017.

Harender Gupta, Thinles Norboo & Sameer Qayoom from BPCL and Sultan Tak- Dy. Registrar and Skarma Tashi-Assistant Registrar of Cooperative Department J&K Govt. along with prominent citizens of Leh were present on the occasion.