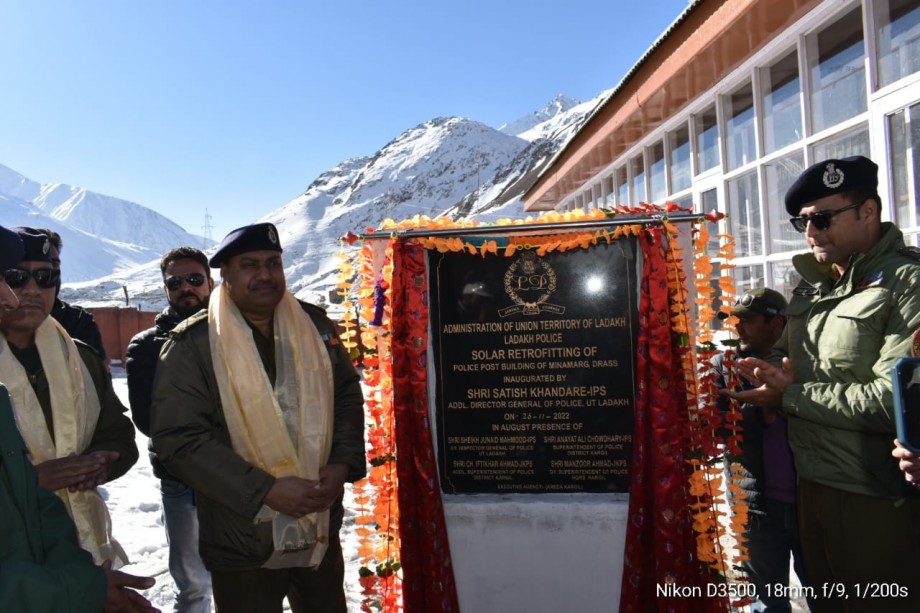 Later, ADGP Ladakh also visited the Holy Jama Masjid of Drass which was damaged due to a recent fire incident. He met with the people of Drass and assured to conduct a fire audit of all important infrastructures. He also stated that Ladakh Police is augmenting all Police Stations, Police Posts by providing basic fire extinguisher equipment and training police personnel in Fire & Rescue services so that they can respond promptly in case of any fire incidents.

Newly upgraded and constructed buildings of Police Station Drass, Police Post Meenamarg were also inaugurated by ADGP Ladakh and inspected all the completed and ongoing developmental works of police at these police units. He hailed executing agencies and police officers for the execution of all developmental works well in time despite harsh climatic conditions.

At Police Post Meenamarg the officer inspected and checked the effectiveness of recently procured Special Winter Clothing by Ladakh Police and expressed satisfaction with the performance.

Interacting with the police personnel deployed at Meenamarg, Drass, and Zojila areas on policing duties, ADGP Ladakh appreciated their performance, dedication, and service towards the nation and its people in such harsh climatic conditions and cold areas. He said that Ladakh Police is working dedicatedly in a professional manner to redress the grievances of the general public irrespective of difficulties and harsh climatic conditions with great courage and commitment.