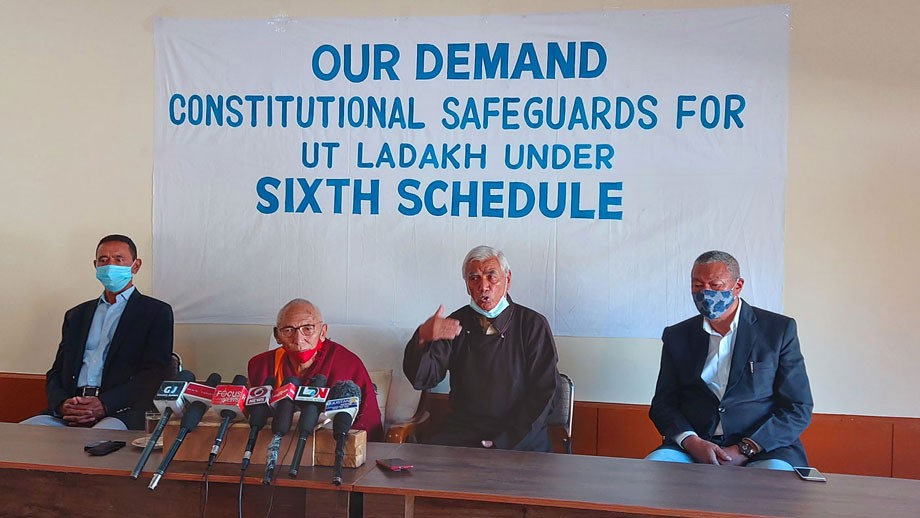 The wind of change is finally blowing in Ladakh after the region became a union territory as veteran political leaders have come together on a common platform to demand constitutional safeguard for Ladakh under Sixth Schedule of the Indian Constitution.

The leaders expressed their gratitude to the Union Government, especially Prime Minister Narendra Modi, for its bold and historic decision to abrogate Article 370 of the Indian Constitution and granting the status of union territory to Ladakh.

Highlighting the movements of the people of Ladakh to get UT status for the region, the veteran leaders said they were motivated by the desire to regain the self-respect through a system of self-governance to preserve and perpetuate the unique social, cultural, environmental and linguistic heritage for the greater good of the local population and the country as a whole. The demand, according to them, was intended for achieving greater cooperation between the people of Ladakh and the Union Government. They stressed that the conventional approach adopted by the Union Government while granting UT status to Ladakh does not match the struggle of people of Ladakh for the political empowerment of the region based on their aspirations to protect their unique identity.

The leaders also highlighted the growing concerns and fears of the people of Ladakh, and strongly raised the need to carry out a few corrections in the present dispensation. They emphasised on the need to take two important steps without any delay, including a legislative assembly for Ladakh, and empowering both the Hill Councils at Leh and Kargil districts to make necessary legislation and rules for areas under their jurisdiction with elected representatives having the final say with the least bureaucratic interference. Secondly, Ladakh should be included under the Sixth Schedule of the Constitution for which the region is qualified as 95 percent of the population is tribal. They said that only such Constitutional safeguards would help to achieve the real purpose of becoming a Union Territory.

Thiksey Rinpoche said that Ladakh needs constitutional safeguard under the Sixth Schedule to protect its unique identity, land, culture, job and the environment. His Eminence said that safeguard is needed for both the present and future generations.

“People of Ladakh are well aware of the need to include the region under the Sixth schedule and so far no one has come out and raised voice. There is no point in talking within ourselves, as we have to stand and put our demand strongly. Time has come for us to stand united and raise our voice”, Thiksey Rinpoche added.

Thupstan Chhewang informed that the decision to stand and strive for the sixth schedule for Ladakh has been initiated after several meetings and deliberations. He said that the demand has the support of different religious organisations and political parties.

Nawang Rigzin Jora and Chering Dorjay also expressed their opinions and stressed demanding the sixth schedule for Ladakh in a unified manner leaving aside all the differences.