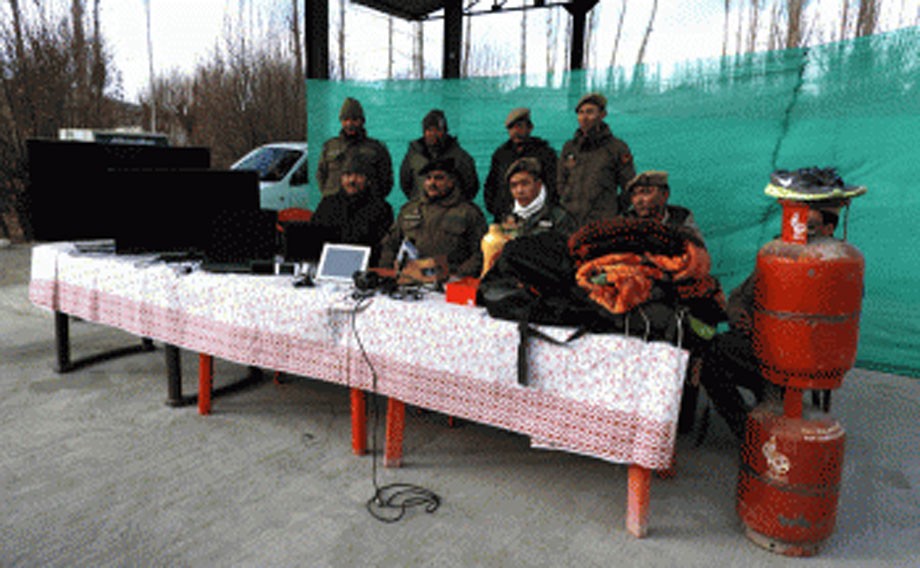 Peer Zahoor-DYSP:  With the growing migration, theft cases are also becoming a problem in society.  The cases are observed frequently in the month of January and February because most of the people visit outside. On the other hand, the non-locals who stay back in winters have no work and they break houses and shops as a source of income.

And in the month of October and November, when the roads are on the verge of closing down non-locals from different parts of the country move back to their native place and manage to get away with the stolen items.  This year most of the theft cases are reported in the month of June and July commonly in and around Leh in broad daylight. The accused caught are mainly scrap collectors in the age of ’20s who are basically from different parts of the country and form a group after meeting here.
In the name of collecting scrap they roam around freely and when found a locked house they break the house. The motive is to steal cash if available or else they take away the jewelleries.
We are definitely putting every effort to curb and solve the problems. The goldsmiths are already warned about such cases so that they can inform us when they come across such stolen jewelleries. In this way, they won’t be able to sell the stolen gold easily and if sold we can get hold of them.
The department is alert and we are putting effort to track down the thieves but public cooperation is also needed.  It is also challenging for us due to the vast area, less manpower and during the peak season, it is very hard for us to keep eye on everything due to frequent VIP movement, religious sermons, and many other activities.
We need to keep an eye on scrap collectors, people who move around with different goods to sell, beggars and donation collectors who easily access within the periphery of houses.
Secondly, people are very reluctant in reporting the incident to the police. Even if nothing is stolen but the thief has entered, one should still report to the nearest police station. Unfortunately, most of the people did not report about such cases.

Thirdly, while giving rooms for rent, verification of the tenant and the person details is must because what happens is many a time when such incident occurs the landlords are not being able to provide proper details of the tenant which hampers the investigation.
People of our society need to be more alert and serious while keeping their precious goods and jewellaries at home.
We have been able to solve the maximum of the cases and there are few which are untraceable.  It definitely takes time to solve such cases and patience is needed by the people because things can’t be solved in one night.

Stanzin Thubwang, Skara: My house was burgled in the month of July this year and around ₹ 2.5 to 3 Lakh worth value has been stolen during the broad daylight.  Soon I was informed about the incident, I immediately reported the police and till now nothing has been recovered.

At one point police justify saying that the accused are untraceable and on the other hand they didn’t inform whether they are carrying out the proceedings further.  Sometimes they say they will send the teams and on the other hand, they say don’t have such team formed.
I am tired of going to the police station every time and have lost hope now. I don’t think anything can be done. I am not blaming the police but there is a confusion about the further proceedings.
Two more houses in Skara Yokma were burgled and almost all the dates were serial wise. Strangely despite such incident being reported earlier cases are still witnessed in the same year and locality.
Police personnel says that catching the thief during the night time is easier but it is challenging to track them in daylight. Their point of view may be logical but I am unable to understand it. Police definitely cooperate with us but the fact is at the end of the day there is no result.
More coordination between the public and the administration is definitely needed but along with it, there is a need for more vigilant because if taken it lightly there is a threat to life also.
Solutions:

Tsewang Dolma, Choglamsar: The unfortunate incident happened on June 13 when the thief broke the house and stole jewelleries worth ₹16 to ₹17 Lakh.  The lifetime earnings and hard work disappeared in just a day which is very heartbreaking.  I have reported the incident after 2 days and in September police caught few thieves and seized the stolen items.  A worth of ₹ 5 Lakh value has been recovered.

People should not buy suspicious stolen items as it encourages them because they can convert them easily into cash. Police do their part and we appreciate it but things can be more result oriented.
It is definitely very important to keep the jewelleries safe and in bank lockers. Being alert is very important.
Solutions:
Hotel Search
Tour Operators
Unfold Ladakh
Marvel Destinations
Wanderlust Lists
Feature Attraction
Peculiarities
fair & festivals
institutions
Guide Books
Contact Us
Subscribe