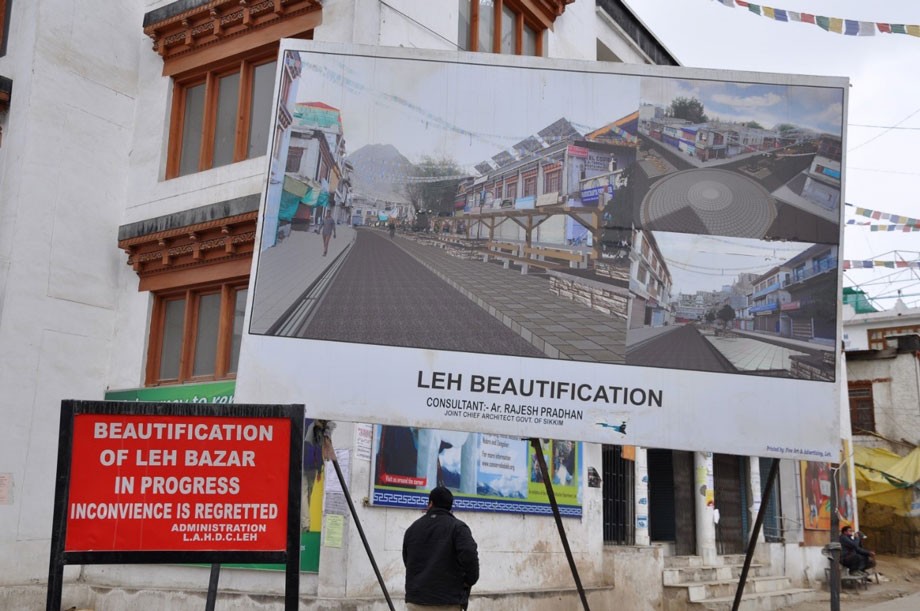 Tashi Chombel, District Superintendent Engineer, PWD Leh: The project is sanctioned under UIDSSMT (Urban infrastructure development of small and medium towns) by Government of India.
There are four projects in all under this scheme these are sewerage for Leh town, improvement of the road network, water supply scheme and solid waste management. Now regarding the completion of the scheme, we already have completed more than 70% of the works in almost all the four projects but certain components of the project such as sewerage treatment plant would take another at least one and a half year.
Other than the usual problems of Ladakh such is the shortage of Labour in winter and the severity of it. One of the biggest problems had been the laying of sewer lines which has to be done when there is no freezing point which coincided with tourist seasons. To lay sewer lines in summer during the tourist season on the narrow roads of Leh was one of the most difficult operations and not all roads can be taken at a time as some of the roads have to be kept open for movement of traffic. In these conditions the inconvenience caused to the general public was understandable. To find a suitable technology for the sewerage treatment plant for the climatic conditions of the Ladakh was also a challenging job, the work has been assigned to WAPCOS a Government of India agency which shall be executing the work on EPC (engineering procurement construction) mode. The vendor of the technology shall have to trial run the STP for six months and then maintain and operate for three years.

The projected deadline for the completion is March 2018 and if required department shall apply for an extension.
Meetings are conducted from time to time between BSNL and our department at various levels. Many times the underground cables get snapped despite utmost care and strict instruction issue to the contractors. It may be mentioned here that there has been no instance of fibre optic cables getting damaged because of the work.
As far as I know, BSNL has not laid any fibre optic cables recently but there are several private agencies which are laying the optic fibre cable. As far as possible we have tried to let these private companies lay their cables simultaneously in the trenches being dug by the department. The beautification project is confined only to the Leh main Bazaar, which is almost complete except for the electrical part that is underground lying of all electrical cables. The work is going on in the ducts which have been kept underground below the Bazaar.

In my opinion, the beautification of bazaar itself has not affected the traffic of Leh, but the various other activities of the project such as mainly the trench digging of sewerage and water supply have caused traffic congestion. The work of trench digging on the roads with high intensity of traffic is now almost complete and it shall be macadamized and the work of macadamization is going on at several locations. With the macadamization of the dug roads, there will be some improvement in the flow of the traffic.

There are some more projects under AMRUT to ease the traffic management in Leh. These are the construction of a multi-tier car parking at the current taxi stand and adjoining land. Shorter road access to polo ground is also proposed, so the people are more likely to use the polo ground for parking.

• There is a need for multi-tier car parking and new approach road to polo ground for parking.
• The parking charges for the designated parking areas around the bazaar should be high and it should be on an hourly basis so that people will use the polo ground parking space which is underutilized at the moment.
Dorjay Mutup, Executive Councillor Work, LAHDC, Leh: The present developmental works going on in Leh town is for sewerage system and water pipeline.  The beautification project has been carrying out from past years and is completed in the main market areas.
This time, we are carrying out work on three main roads such as Zorawar Fort to Petrol Pump, Petrol Pump to Skalzangling and Maney Tselding Leh to SNM hospitals. Since these roads are the regular main roads it is posing traffic congestion.
We have set our priority to complete the road from the main gate to the petrol pump, Petrol Pump to Skalzangling, Skalzangling to STP Agling and from Fort road to Petrol Pump this year. But if we talk about the whole project it is estimated to complete till 2019, it is tentatively taken but if the contractors work perfectly and the funds release on time we can get it complete before 2019.
There are many things which we have to keep in mind while executing the work, there is traffic which has to move smoothly, BSNL cable which needs not to be damaged, cement which needs proper curing. Curing of cement is an important thing which will otherwise cause problems in the later stages. People should realize that there will be an inconvenience and they need to cooperate.\r\n
There are different depths for different work purpose. For sewerage, the depth of the pipeline should be deep and for drinking water pipeline it does not need much depth as compared to the sewerage. So we generally see digging of the road again and again because both the contractor for different work cannot work together.\r\n
We can see the Leh main market today and Housing Colony which we have completed the sewerage, water pipeline and blacktopping. Till the completion of Sewerage Treatment Plant in Agling, we have arranged a temporary storage tank one near Zoravar fort and another near Royal Palace Hotel.
The blacktopping of the road is also completed in the area where the sewerage and water pipeline has completed. We have completed the road to DC office and Skampari, main gate Leh, Skalzangling.
There is close coordination between each department during the execution of work. Before blacktopping of the road, we will confirm all the concern departments including BSNL to verify their work because after blacktopping we are not advised to dig the road again. We are trying to complete the work as soon as possible.
From the first week of August, it is expected to start blacktopping of the road from Petrol Pump to Skalzangling which is the main road. Till the end of August, we are trying to complete most of the work.
We are trying our best to complete the work so as to ease the inconveniences of the people. We are getting good cooperation from the public as compared to the past years.
Hill Council has constituted a monitoring committee who will check the quality of work, in addition, we have engaged a consultant who will check the resources used for the work as per the proper norms and condition.
Solutions:
•   People need to cooperate as we are doing it for a better tomorrow.
•   The people think that it should be complete within a less period of time, but it takes time because if we talk about the sewerage system, the curing of cement is very important to make it concrete otherwise we have to dig it again later.

•   The concerned department and contractor should work satisfactory and perfectly in order to have a proper successful project.
•    Proper specification per cent of resources needs to be checked by the respective AEE, Engineers etc so as to strengthen the work.

Phunchok Dorjay, General Manager, BSNL: A lot of developmental works are taking place in Leh under Leh Beautification project. Due to which, BSNL cables get damaged, traffic congestion arises, internet problem, network problem and lots of inconveniences are faced by the people.

In fact, in every kind of developmental works there comes inconveniences but we have to bear and cooperate because it is for some period of time. BSNL is also facing lots of problems because of the breakages and cutting down of cables due to their works. They have been digging for three times at the same place for different plans such as sewerage, water pipeline and finally for blacktopping. In all these three phases, our cables get a breakdown as it is widely spread all around.
If we talk about the coordination among the concerned department, we have good coordination. Prior to the enforcement of the project, we hold meeting with all the important stakeholders to discuss the work. Besides, to discuss small issue and problem we are holding regular meeting with PWD and concerned stakeholders. But still, the problem persists.
For immediate repair of the cable, we have deployed our official member wherever the developmental works are going on. We try our best to repair each and every breakdown at an internal level instantly. Our members are working in the odd hours and try to minimize the inconveniences for our customers.
Recently on 12 July, we held meeting with CEC Dr. Sonam Dawa and other stakeholders to discuss more the proper coordination for the functioning of the developmental work, in which we have decided to hold a fortnightly meeting with the stakeholders of the concerned department.
We have got several complaints from our customer due to the breakdown of internal cables within Leh. Wherever possible we have restored and there are many customers who have remained cut off from past two or three months.
There is no mechanism in BSNL to rebate the plans of the customer if the individual cables got breakdown but if the OFC has a breakdown then under the guidelines of TRAI, there is a mechanism to rebate the customer.
We have rebated the customer this year when the OFC had a breakdown for almost three months.
However, the individual can visit our office with the complaint if their network gets a breakdown and could not use it. We can rebate the same individual after cross checking the usages of internet and meter reading of landlines.
If talk about the complete smooth functioning of the network in Ladakh without any breakdown we can say that after two years there would be good network because of today, there are lots of developmental works going on in Leh as well as along the highway from Srinagar to Leh. There are six numbers of agencies which are working from Srinagar to Leh and they are working and digging on the same road where our cables are laid.
To cope up and take prompt restoration of the cable out there, we are going to send a special team of Ladakhi who will stay there round the year and take stock of the breakdown. We have imparted training and going to send them with proper sets of equipment.
Solutions:
•   Unless and until the developmental project will not complete, the problem will always be there so we should bear it for a while.
•    There should be alternative links of OFC, so if one got damaged another could be an alternative.
•     People should cooperate us and feel the responsibility to care the public property to prevent damages during their individual construction also. They should inform us if the cables run around under their construction site so that we can immediately restore it.
Hotel Search
Tour Operators
Unfold Ladakh
Marvel Destinations
Wanderlust Lists
Feature Attraction
Peculiarities
fair & festivals
institutions
Guide Books
Contact Us
Subscribe