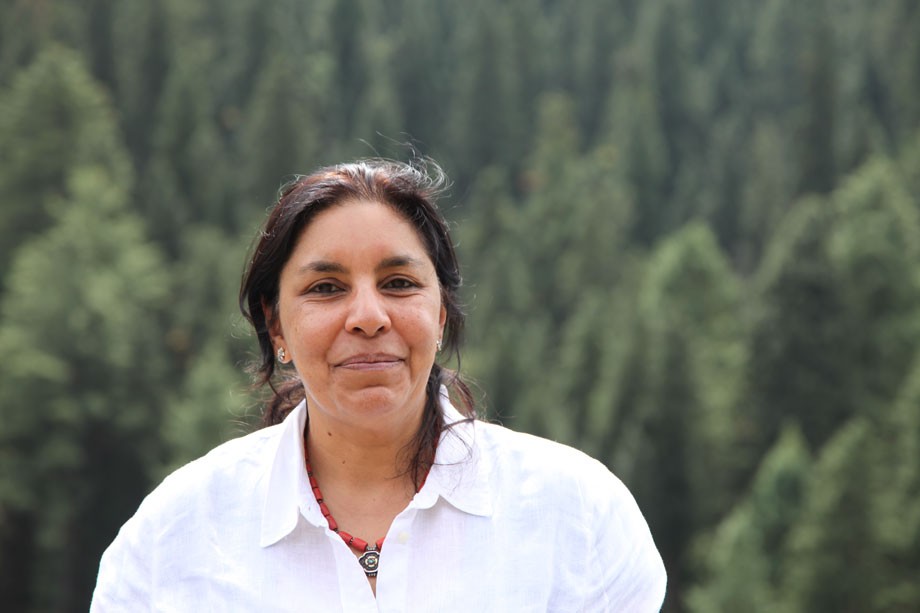 Q. When and how did Ladakh Arts and Media Organization start? What was the main objective of setting up the LAMO Centre?

Soon after I completed my Ph.D., I wanted to do something in Ladakh that focused on and contributed to the arts, as that was my background. I was interested in working in the areas of arts education, with local art practices and contemporary practitioners in Ladakh. I had worked with INTACH in Mumbai earlier and was also interested in heritage.

When Ravina Aggarwal and I first set up LAMO we initially had no fixed space. It was a chance meeting with conservation architect John Harrison who introduced me to Dr. Angchuk Munshi, the owner of the Munshi house. The Munshi house had been identified in the 1987 INTACH conservation plan for Leh as an important historic building; the plan had proposed its restoration as a museum. In addition to its educational, cultural and social objectives, LAMO wanted to identify a heritage building in Leh, conserve it, and establish an arts resource centre within its premises. In 2005 we started the restoration work of the Munshi house, a year into the restoration Stanzin Gyaltsen of the neighbouring Gyaoo House approached LAMO and we restored it also.

Together with John, LAMO drew up a plan for the use of the two houses, as a community arts and media centre. LAMO’s brief was that it wanted a space from which it could conduct outreach programs, research and documentation projects, workshops, ar residencies, performances and exhibitions that showcase Ladakh’s material and visual culture, performing arts and literature. The restored buildings were accordingly designed to accommodate a library, offices, artists’ studio, and spaces for exhibitions, performances, and workshops. At the same time, the LAMO Centre would in itself be a historic example of Ladakhi material and visual culture. In 2018 we added a Sound Studio.

Apart from our on-going work, I’d like to believe that LAMO has also created a space in Leh for the cultivation of new ideas and imagination to flourish, open discussions to be held, exploration of contemporary art and media. We were extremely honoured and delighted when in 2018, LAMO received the ‘Award of Distinction’of the UNESCO Asia-Pacific Awards for Cultural Heritage Conservation. In 2019 LAMO received the award of ‘Project of Influence’ at the Best in Heritage conference in Dubrovnik, Croatia. The recognition was for both efforts to restore or conserve structures of heritage value and also demonstrate their appropriate contribution to the surrounding environment, as well as the local community’s cultural and historical continuity.

Q. LAMO has restored two old houses of Munshi and Gyaoo in the old town area. Are you planning to expand this?

I’m not sure about that right now. Though I would love to see other heritage houses in Old Town and other parts of Ladakh, get restored and appropriately used, I know we can’t do it all. We have a plan for another project in a historical house but that requires some thought to conceptualize and find funding. I like to take things slow and build on what we have. It has taken us 10 years to get to where we are right now and to know our strengths and weaknesses. Right now, LAMO is blessed to have a great team, led on the ground by Tashi Morup. Our Projects Director and our Trustees and advisors have been very supportive. To everyone, I am extremely grateful.

Q. How do you fund your projects?

That’s never an easy one! The restoration of the LAMO Centre was done out of personal funds, and some donations from private individuals. John Harrison was partly supported for his travel and stay in Leh by the INTACH UK Trust. Since we opened, like most NGOs we have raised funds through submitting project proposals to various institutions, NGOs, foundations and government departments. In addition, we also try to raise funds using our resources at LAMO – so we charge a  nominal entry ticket at the door (as a donation) and take visitors on a guided tour of the buildings; conduct heritage walks in Old Town; rent out our space to groups for talks, workshops, film, and photoshoots, and have a small shop from where we sell a range of art
works and books.

Q.When was your first visit to Ladakh and how did your journey to Ladakh begin?

I first came to Ladakh in 1987, I had just finished my undergrad degree in Mumbai and wanted to take a year off and go to the mountains. A friend gave me Andrew Harvey’s ‘A Journey to Ladakh’ to read. Romantic as it was, I was fascinated [by the place]. The same friend and I then travelled to Leh together and ended up staying 6 months. During this time, I taught at the Moravian Mission School and studied Buddhist Philosophy and Thangka painting at CIBS. I then went on to study Anthropology at Oxford University and came back to Ladakh for my research, first for my masters and then Ph.D. I chose to study textiles, initially looking at nomadic textiles in Rupshu. This was much against my professor’s wishes, a Tibet and Bhutan specialist, he said ‘there were no textiles worth studying in Ladakh!’ I guess I proved him wrong.

Q. Can you tell us about the books that you wrote on textiles?

The same professor who discouraged me from studying textiles in Ladakh recommended my Ph.D. thesis to a publisher. That was my first book ‘Living Fabric – Weaving among the Nomads of Ladakh Himalaya’ which was awarded the 2003 R L Shep award of the Textile Society of America for the year’s best book on ethnic textiles. Then Clare Harris and I worked on an edited volume ‘Ladakh – Culture at the Crossroads’. My work on textiles here has also taken me to many places outside Ladakh – Kashmir was an obvious one, to study the trade in pashmina and shawl weaving. This led to a publication with Janet Rizvi‘Pashmina – the Kashmir shawl and Beyond’; the book has gone into its second edition and fourth reprint. There have been other journeys to Banaras (now Varanasi), Kalimpong, Dharamshala, Bhutan, Sikkim, Nepal …. To research textiles.

I have also written many articles on various aspects of Ladakhi textiles from trade textiles to gyaser (silk-brocade) and the interventions of the Moravian Missionaries. I’ve also looked at change on the Changthang and the politics of pashmina. I hope to eventually do a book on Ladakhi textiles, I’ve been collecting material for many years now but have still to start writing. What fascinates me about textiles in Ladakh are the stories connected to the making of the fabric – right from the livestock to the finished products, what they communicate about society, culture, history and politico-economic in Ladakh.

Q.You have done a lot of research on textiles? What are the future prospects of Textiles in Ladakh?

I think it is a very exciting time for textiles and fashion in Ladakh. There is also a visible resurgence of pride in local dress. The last 10 years have seen several Ladakhi designers set up shop in Leh, working with both traditional designs and new patterns inspired by them. There are also NGOs working with fibres and women’s groups, with an emphasis on livelihood enhancement. Gradually they are all creating a market, both in and outside the region. I think this market has a lot of potentials to grow in many different ways and to open up creative work opportunities for many younger Ladakhis.

At the same time, I think there has to be some focus on fibre development in the region, livestock management and the lives of the pastoralists. While pashmina is being given emphasis, wool should not be side-lined because Ladakh has a very long tradition of working with wool. Also, local wool has its advantages and replacing it with Merino is not always beneficial. Livestock numbers, especially on the Changthang, are being skewed in favor of the pashmina goat and we don’t know as yet what the long-term ramifications of this will be. But we do have the example of wide-spread desertification taking place in western Tibet as pashmina goat numbers have increased there. Also, for pashmina to prosper there has to be some enhancement to the lives of the Changpas. When I go back to Changthang and sit in the tent with the family that I lived with, it is as if in 30 years nothing has changed!

“Today, we live in a world that is changing more than ever before, and at a rapid pace. And while some of that is a positive sign of Ladakh’s prosperity and growth, it also comes with its challenges and problems. Culture will change because it is not merely rooted in tradition but is also open to innovation. You have to learn to embrace that change but at the same time acknowledge and protect your past for future generations, take pride in it and learn from it. Ladakh is truly an amazing place and I hope it endures.”