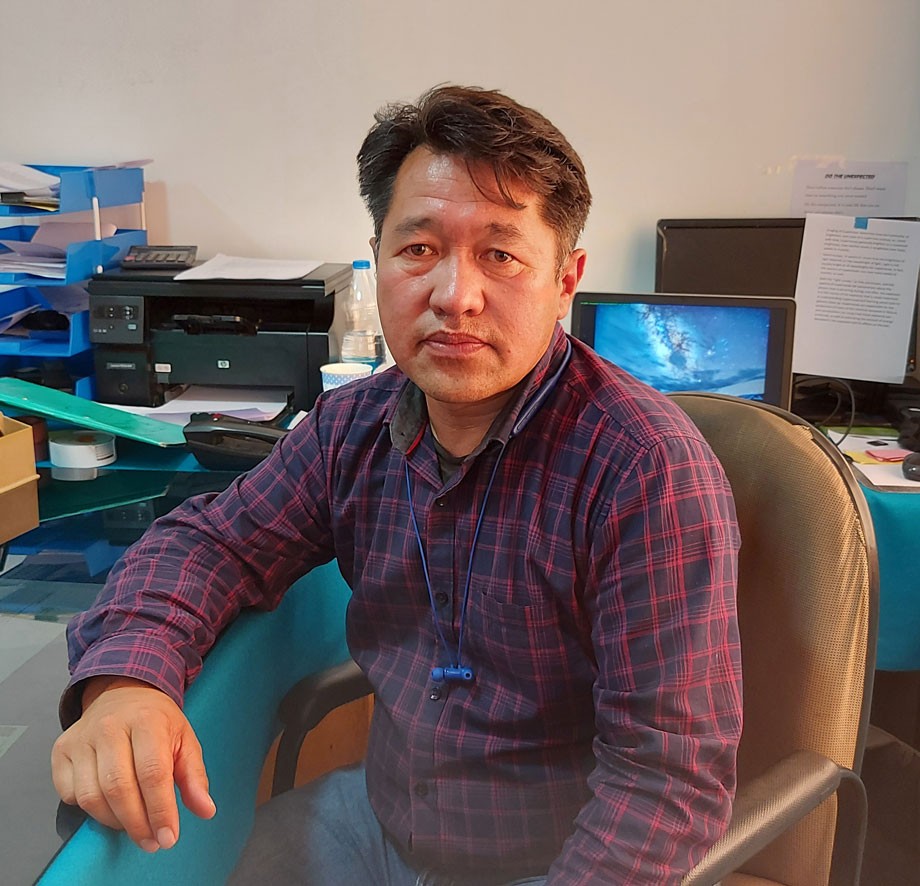 Q. Congratulations on becoming the first Indian to be inducted as Honorary Member of the International Astronomical Union. For our readers who may be unfamiliar with your work, could you please tell us a little bit about yourself?

I studied Engineering at Engineering College, NIT Surat. After course completion, I came across that the Indian Astronomical Observatory is establishing an Observatory unit in Leh and are hiring people preferably locals. A post for a trainee engineer was available which was a good opportunity for a fresher like me and also the job is in Leh. Since the unit was new, I was sure that will learn a lot and experience many new things. The Observatory unit was inaugurated and it’s been 23 years working with Indian Astronomical Observatory and 15 years as an Engineer In Charge.

I am privileged to become the first Indian to be inducted as an Honorary Member of the International Astronomical Union. The International Astronomical Union (IAU) is the foremost international association of professional astronomers and is over 100 years old. It has more than 13000 individual members and 82 national members, including India. In 2018, IAU decided to award honorary membership to individuals who have strengthened the development of astronomy.

Q. Brief us about Indian Astronomical Observatory (IAO) Hanle. How important it is and what role it plays?

Six teams of astrophysicists from the Indian Institute of Astrophysics, Bengaluru were sent, to different places for viable high altitude sites for an Indian Astronomical Observatory. The sites include Tsomoriri Lake and Hanle in Ladakh; Kalpa and Kaza in Himachal Pradesh; Devastahal in Uttarakhand and Mt.Abu in Rajasthan. The team selected Hanle as the most appropriate and viable option for the observatory site. Hanle was the best site for an observatory because the village is situated at 4500 metre above sea level also the cloudless skies and low atmospheric water vapour make it one of the best sites in the world for optical, infrared, sub-millimeter, and millimeter wavelengths. Moreover, Hanle has approximately 150-180 cloud-free nights, besides over 260 nights, that are useful for observations. The region is not getting affected by monsoons, thus experiencing fewer instances of cloud cover.

At present, the observatory has 2-metre Himalayan Chandra Telescope (HCT). The telescope is being operated from Bengaluru. The observatory proves a perfect site to study stars and several experiments.

Q. Many of us might not know the importance of Astronomy. Can you brief us about it?

In ancient days, farmers of Ladakh look to the sky and decide when to plant their crops and harvest. Likewise, astronomy was used to navigate the ocean, measure time, and mark the seasons in the olden days. As one of the oldest sciences, astronomy is part of every culture’s history and roots. The discovery that the basic elements that we find in stars, and the gas and dust around them, are the same elements that make up our bodies has further deepened the connection between us and the cosmos.

The study of astronomy contributes to technology, economy, and society by constantly pushing for instruments, processes, and software. Astronomy is transferred to industry, medicines, energy sector etc. For e.g, The sensors for image capture developed for astronomical images, known as Charge-Coupled Devices (CCDs), were first used in astronomy in 1976. Within a very few years, they had replaced film not only on telescopes but also in many people’s personal cameras, webcams and mobile phones. A low-energy X-ray scanner is currently used in clinics and medicine. Thus, astronomy is part of our society.

Q. Tell us about the Hanle Dark Sky Sanctuary and why it is important.

I have spent most of the time of my service at Hanle observatory and witnessed significant changes in the place. The place has become a destination for many tourists who visit to watch stars. Along with wildlife, I feel that that the region has a good potential to attract people all over the world to witness the night skies. The dark Sky sanctuary concept is already very popular in western countries and Ladakh especially Hanle has a huge potential for Dark sky sanctuary as the sky remains clear. The declaration of the sanctuary will also benefit the villagers of Hanle.

The idea of a dark sky sanctuary is to reduce light pollution which has a negative impact on the environment. Lights have prevented us from watching the night skies. We need to avoid artificial lights for economic benefits and also to encourage seeing night skies. Dark sky sanctuaries will safeguard the pristine dark skies of Hanle and its surroundings bringing local development with the promotion of Astro-tourism.

Q. What is astrophotography about? How potential do we have in this field in Ladakh?

10 years ago, I met a very famous photographer Ajay Talvar during his visit to Hanley Observatory. He showed me beautiful images of night skies. I was stunned to see the photographs and felt that we being a local having such an opportunity to work on astrophotography are unaware of the fact. I developed a strong passion for astrophotography, it became my hobby and because of my job in Hanle observatory, it further blossomed.
Ladakh has access to dark skies and the clarity of the sky is such that you can click best of the images. Also with the night sky, you can get beautiful landscapes in one photograph. In the coming days, Ladakh will become a hub for astrophotography and will also eventually boost Astro tourism.

Q. Do you have any advice that you’d like to pass on to photographers just beginning to take an interest in astrophotography?

I would say start no matter how good or bad you are with the camera. You can start with a basic camera in the beginning. Everyday practice will definitely groom you up. You will learn as you start and work on it.

“I am quite fortunate that my father didn’t stress me to become a doctor like him. No job is too big or small. My simple advice to you all is that we should have a hobby along with our daily work to make our life more interesting.”