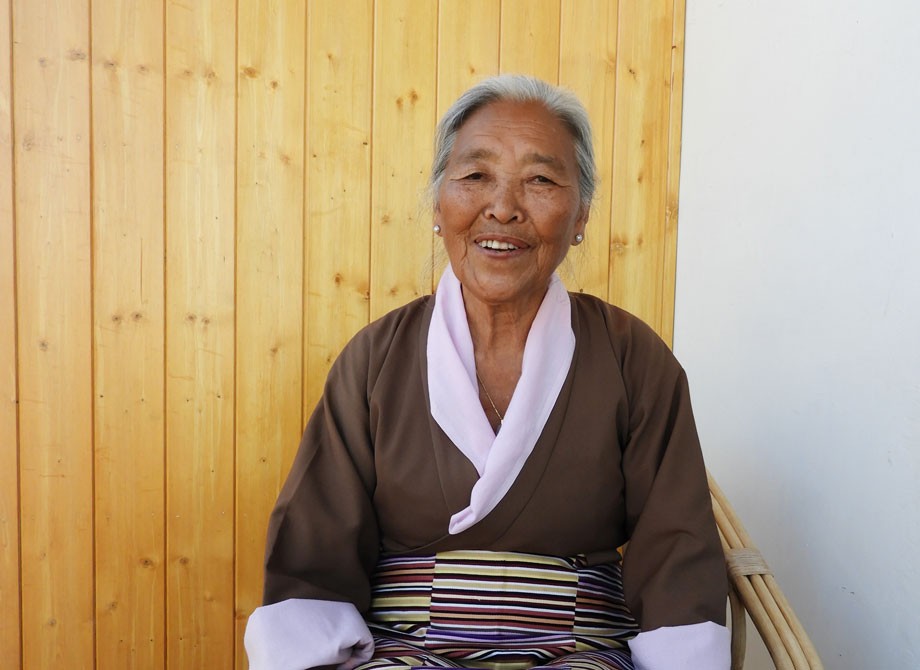 Q.  Kindly tell us about yourself.

I was born in Larjay family, Phay village. I left home at a very young age to study in Kashmir, and I was the first girl from Ladakh to go outside to do schooling in a co-ed school. We were a group of children from Ladakh who were sent to the Mahatma Gandhi Sevagram Ashram, Wardha, near Nagpur, to learn skills in handicrafts.

It was Bakula Rinpoche who conveyed the message to the villagers. Except for a few villagers of Nimmo, no Ladakhi people showed any interest in sending their kids to an unknown place. But my dad decided to send me to Gandhi Sevagram Ashram. I was the youngest child at the Ashram. But after a few weeks, they decided to send me back to Srinagar to study in a school there.  I was 13-year-old then.

Bakula Rinpoche visited Srinagar and requested Pundit Shridar Kaul to keep me with his family and he agreed. I spent eight years of my schooling with their family. His family treated me like their own child. He would tell his children that I am their elder sister.

I completed my metriculation in Srinagar, and later I got an opportunity to work in AIR, Delhi, for three years. And then I got married to Rakra Tethong Rinpoche, a renowned Tibetan Scholar, in 1958. We left India on August 15,1960, and served in Switzerland for 36 years and I serve as the housemother of the Tibetan House in International Children’s Villager Pestalozzi in Trogen.

Immediately on retiring from the Pestalozzi Village, I began working on educational projects in Ladakh and founded Aktion Ladakh.

Q. Tell us about Action Ladakh and when it was founded?

Aktion Ladakh was founded in the year 1996. When I had retired from my job in Switzerland, I discussed the decision to open a Kindergarten school in Phey with my friends in Switzerland. The main aim was to provide financial assistance for the new Phey Kindergarten School.

With time, the number of donors increased and it was the generosity of my friends in Switzerland which had made it possible to start three Kindergarten schools in the villages of Phey, Nimmo and Spituk.
Together with the villagers of Phey, I was looking for a solution to help children receive better education.

Q. How many schools have you adopted? How are they performing now?

The kindergarten as well as the middle school of Phey village has grown steadily. In the last 22 years, many alumni were admitted in good schools and colleges in Leh, Srinagar, Jammu and Delhi. Now, students are employed in government as well as private jobs in various fields.

Q. Why you felt that kindergarten system of education should be there in all the pre-primary nursery school of Government schools?

There was a time when the villagers had lost their faith in the village schools, and those who could afford sent their children at a very young age to private schools in Leh. The parents had to carry their children on their shoulders, 2-3 km to the main road to catch the bus and then had to wait at the school gate to bring them back to the village in the evening. Only few students from the poorest families attended the Phey School and the school was on the edge of being closed, as had already happened in other villages.
It is very important to keep the children with their family in the initial years. They learn a lot through practical knowledge. They need care and love. It is very sad to see parents crying when they send their children away.

I got worried because I knew how much effort Bakula Rinpoche had put into opening primary schools in villages of Ladakh. So, Dr Nawang Tsering, the late Lobzang Thapkas and I decided to work for the improvement of the existing village school.

Q. How many volunteers have worked so far?

We have received more than 50 volunteers till date and they did a wonderful job here, in improving the kindergarten education system in Ladakh ( Phey, Nimo and Spituk). I was fortunate to have dedicated Swiss supporters and volunteers, and most of them belong to educational fraternity.

Besides, we support teacher training programmes in Zanskar, Nubra and Turtuk. So far more than a thousand government teachers have received training from our volunteers at District Institute of Educational Training Leh (DIET).

Q. Aktion Ladakh has contributed to making schools of Phey, Nimoo and Spituk as model schools. What are the main objectives of Aktion Ladakh?

The primary objective is to support Government education system by ensuring a firm foundation of elementary education in a joyful learning environment.

Another objective is to help children grow in the village environment. It was felt that children should live and grow with their parents, grandparents, and their siblings. When children are with their family, they learn values like helping grandparents, looking after their younger ones, showing respect and caring for their elders.  In the village, they learn to keep their surroundings clean and become familiar with their religious traditions. I felt it was important to bring up children in the village environment as I myself grew up in village surroundings.

Q. What are the future plans of Aktion Ladakh?

The Aktion Ladakh Kindergarten School project is based on the principle of ‘Helping people to help themselves’. The organization has been supporting the three kindergarten schools in Phey, Nimmo and Spituk, for almost two decades. As the project name itself indicates, Aktion Ladakh is not a prerogative of three village schools but belongs to entire Ladakh. Though Aktion Ladakh is gradually planning to reduce its financial support for kindergartens, it will continue its link with these schools in the educational part and work together with the teachers in future as well. In the meantime, the three villages have already started exploring ways for generating sources of income for their further sustainability when Aktion Ladakh steps back from the scene. Yet, in all the cases of present and future of Kindergarten Schools, it believes in the principle of what Lord Buddha had said: “Mine is to show path, work out your own liberation diligently.”

Message to the readers:

“Our philosophy is to provide the means to develop the physical, social, emotional and intellectual abilities of each child, according to their individual needs, through a warm and caring atmosphere and a wide variety of experiences.”