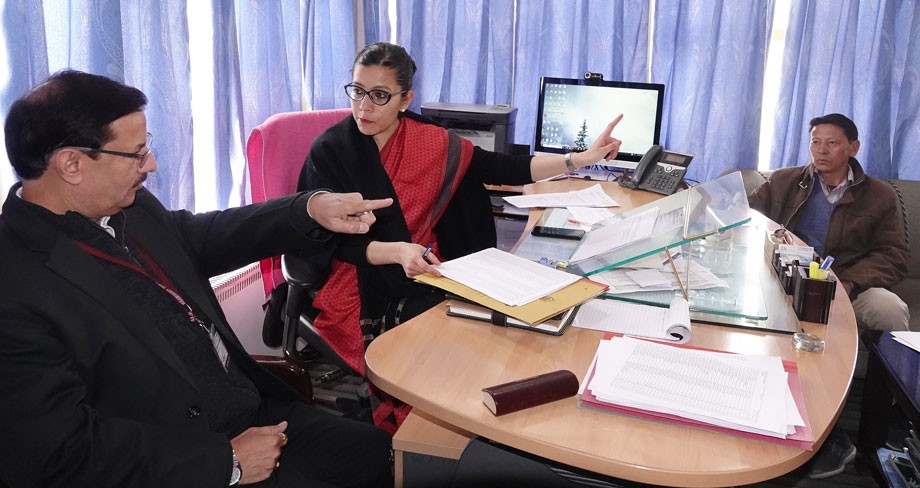 The second stage randomisation of polling staff for the forthcoming Lok Sabha election was held on April 17 at NIC office.

The randomization was done by Avny Lavasa, Returning Officer under the supervision of Alkesh Kumar Sharma, General Observer for Ladakh Parliamentary Constituency.

Avny Lavasa informed that there are 295 polling stations out of which 49 are purely women polling stations with total engagement of 1,411 polling employees in Leh district.  All required training has been imparted to all the polling staff in phase manner and final training will be given before their departure to respective polling stations.  Also, she assured to complete all the necessary procedural process on time to ensure smooth conduct of the election on May 6 in Ladakh.

Alkesh Kumar Sharma scrutinised all the documentation process of randomisation of polling staff in detail and gave instruction to freeze it.

He instructed the BLOs to make photo voter slip available to every individual to ensure a proper count and validity of voters.

Later, he also attended the training programme being given to Presiding Officers and P1 officers at SSK, Leh.

Addressing the trainers, he said that India is known for the largest democratic election process and people from other countries even come to India to study our election process.

He said that the role of POs and P1 are very crucial in the election process and urged all polling staff to thoroughly study the ECI guidelines and perform their election duty with full responsibility.

The General Observer also inspected the counting centre and strong room at SSK, Leh. Also, he visited some of the hypersensitive and sensitive polling stations in Leh and nearby places.