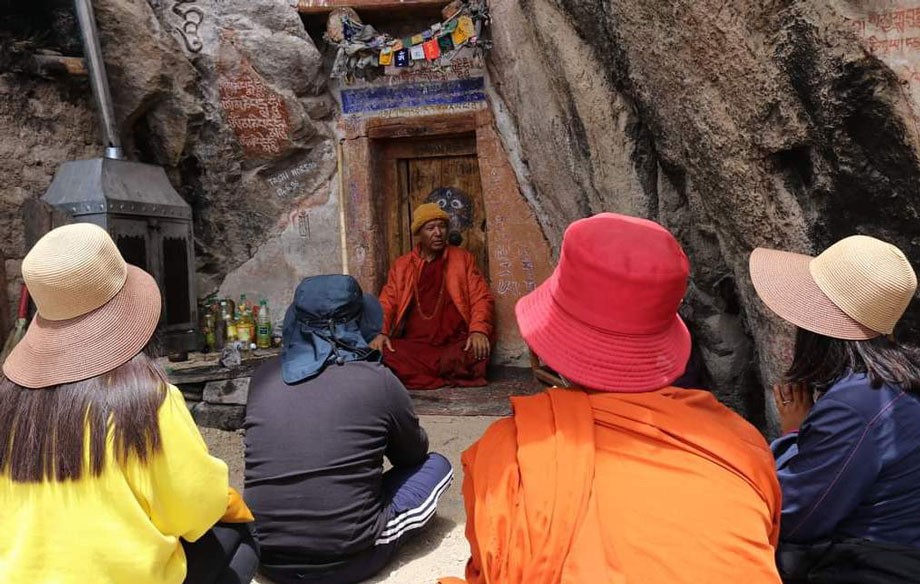 They meditated and offered a special prayer for the corona virus free world and world peace at each holy caves and temple.

Ven. Bhikkhu Sanghasena also distributed relief materials to needy families in each village. Also, counseling on how to combat and win the fear of Corona pandemic among people was imparted. As a part of MIMC COVID relief program, Bhikkhu Sanghasena announced a donation of ₹ 50,000 to the welfare of Lamayuru Village, ₹ 25,000 each to the Lamayuru and Atitse monastery.

People from each village extended warm reception to Ven. Bhikkhu Sanghasena and his team. The Shangrila team of MIMC presented Healing Mantras and Divine songs to the gathering.

The Dakmar Cave in Hemis Shukpachan Mountain is famous in the entire Himalayan region. Bhikkhu Sanghasena after finishing his monastic study and training, return to Ladakh in early 1980s. Before establishing Mahabodhi International Meditation in Leh, he spent some of his most valuable time in this Cave meditating.