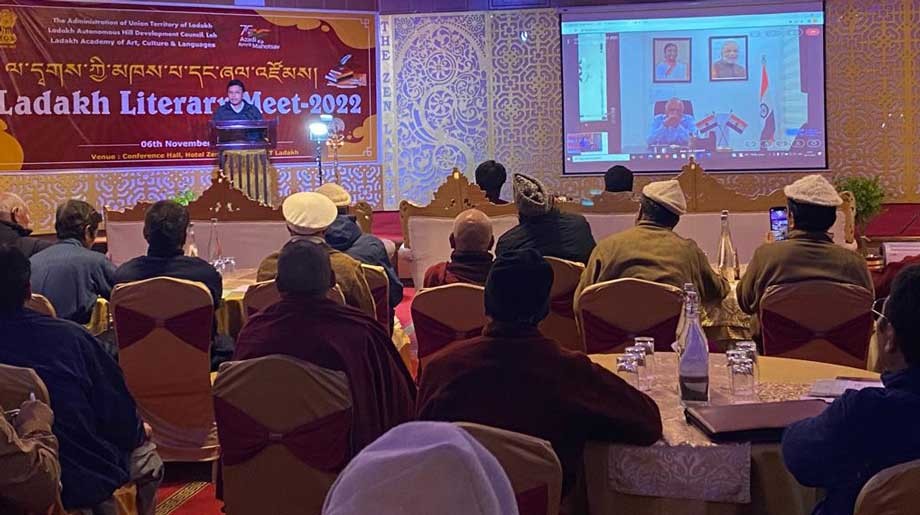 Ladakh Literary Meet 2022 was organised by the Ladakh Academy of Art, Culture and Languages (LAACL) on November 7.

LG Mathur stated that unlike the general impression of people from outside Ladakh as a remote area, this trans-Himalayan region has a very old and strong culture and identity. He also stated that the UT Administration and the Hill Councils will facilitate a literary meet with scholars and literary figures from other parts of the country so that the literary figures from Ladakh could interact with them and the others would also know about the rich history and culture of the region. He further stated that some of the petroglyphs found in Ladakh are more than 10,000 years old which shows Ladakh’s rich and old culture.

He stated that Ladakhi is a rich language and shared the efforts being made to prepare a Ladakhi dictionary of around 25,000 words, compile around 4,500 articles and enumerate more than 1,000 folk songs of Ladakh. Stressing the need for the protection of the Ladakhi language, he stated that society has a crucial role to play in this regard. He also stated that UT Administration, both the Hill Councils and Panchayati Raj Institutions (PRIs) would make efforts to raise awareness about Ladakhi literature and culture among young students in schools and colleges along with putting up books in local languages in the district libraries.

LG Mathur stated that the literary figures in Ladakh have an important role to play in charting the course of society to connect the young generation with the Ladakhi culture and literature. He stressed the need to outreach in schools and colleges. He stressed the need for the youth to have a strong base so that they are not affected by social media culture and language. He emphasized the need for the youth to have faith in their identity, culture, and rich heritage as it would enable in promoting a strong society.

LG Mathur also emphasized the need for young students to learn the local language, understand the rich folk songs, literature, and be proud of their own heritage.

Deputy Chairman, LAHDC Leh, Tsering Angchuk, emphasized the need to take Ladakhi literature forward and raise awareness about the rich Ladakhi art and culture among the youth. He requested organising such literary meets on different platforms to inculcate the habit of reading among youth and generate their interest in literature.

Former Director, Central Institute of Buddhist Studies (CIBS), Dr. Nawang Tsering spoke on the development of Ladakhi history, art, culture, and literature. Ashraf Ali Sagar and Professor Jamyang Gyaltson present their papers on the overall literary development in Kargil and Leh, respectively, along with literature and its various aspects.

Later, the literary figures from Leh and Kargil took part in the poetic symposium in Purgi, Balti, Ladakhi/Bhoti, Dard-Sheen and Dard-Arya languages.