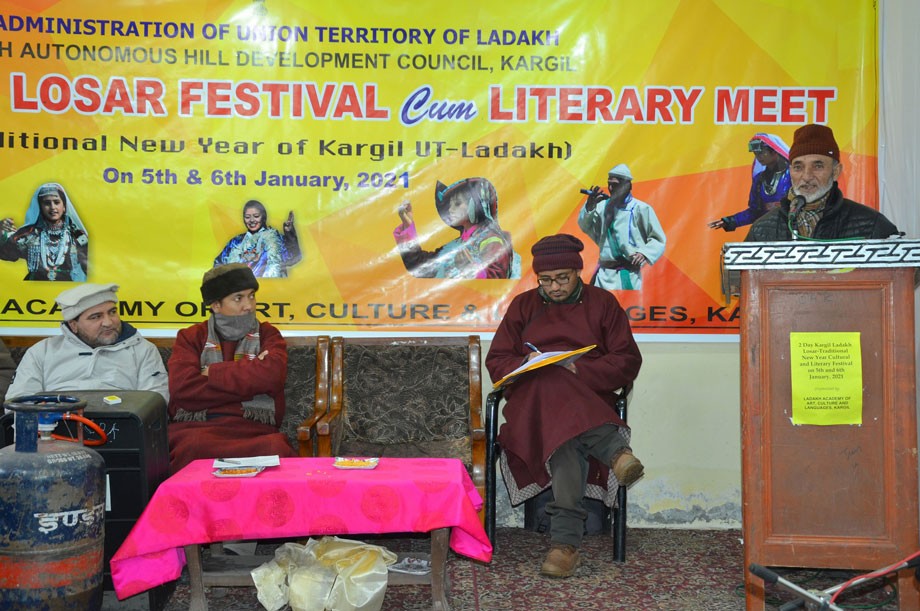 Mubarak Shah Nagvi while extending warm greetings and wishes to the people of Ladakh on Losar expressed optimism that the new year will bring with it prosperity, peace, health, and well-being. He said that 2020 was a tough year for the whole of humanity due to challenges thrown by the COVID-19 pandemic and hoped that the New Year brings happiness and joy to all.

He expressed happiness over the participation of young writers, historians, poets, and artists of district Kargil in promoting the culture and heritage of the place and stated that it is encouraging to see them draw inspiration from the intellectuals which is a positive development and also need of the time.

He also applauded the role of LAACL in promoting the cultural activities and providing writers and poets continued platform to showcase their creativity and share their fresh literary and cultural endeavors.

Executive Councilor, Tourism Er Phunsog Tashi also extended his heartfelt greetings to the people of Ladakh on Losar and expressed hope that this year will prove a herald of good health and joy.

He said that Kargil has a unique multiethnic culture and linguistic traditions on account of which people across the globe come here to witness and adore this great culture. He stressed the revival of culture and heritage and urged the local clubs, organizations, and volunteers to come forward and work towards the promotion and preservation of art, culture, and languages adding that the officers of LAACL should extend all-out support to such organizations and individuals.
“We should be focused to revive our heritage and culture and the LAACL has a foremost role to play in it, Losar is not just confined to Ladakh only, it’s cultural resonance spreads across Tibet to Baltistan”, EC added.

Deputy Secretary/ Special Officer for Cultural Activities G-1, LAACL Kargil Nazir Hussain said that the department's effort has always remained to promote and revive the heritage and culture of Kargil, and the two day Losar Festival is one among such events in this regard. He said adding that LAACL Kargil is going to organize a 15 days traditional music workshop and cultural programmes during Mamani Food Festival in the coming days.

Later, Special Officer for Cultural Activities Kargil Muhammad Ali Tak extended gratitude to all the guests, participating poets, writers, and artists for having participated in the event despite severe cold and snowfall.