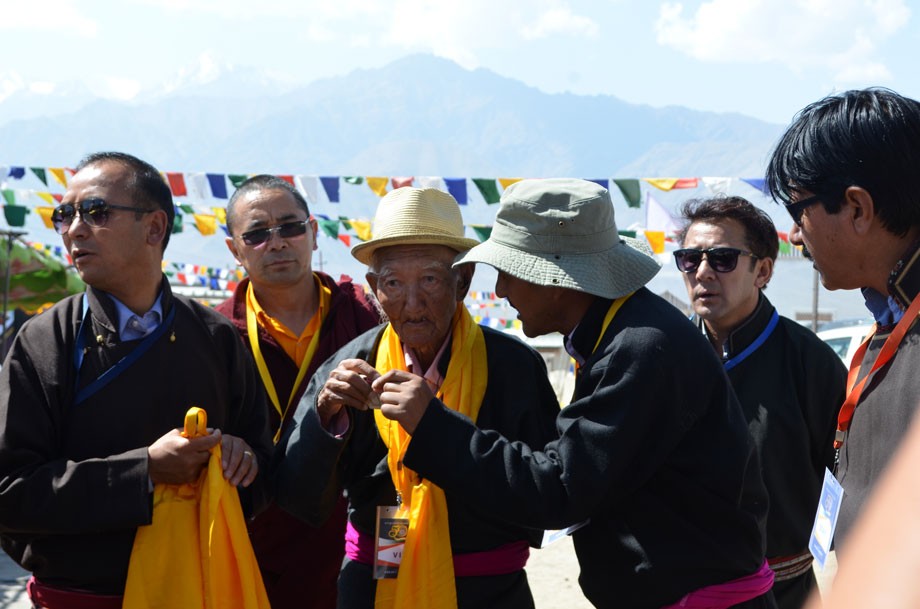 The speech of Tashi Rabgyas was read out by eminent scholar and writer Dr Jamyang Gyaltsan.

He appreciated the tremendous contributions rendered by JKAACL Leh towards the preservation and promotion of the heritage of Ladakh since day one. Wishing for more glorious years for the academy, he said, "Completing 50 glorious years added more feathers to its work."  He released JKAACL Leh’s annual publications of ‘Sheraza’ and special publication of K-sar saga.

Munir-ul-Islam, Secretary JKAACL Srinagar congratulated and appreciated the department for its resourceful journey. He urged people to preserve the unique and rich cultural heritage of Ladakh.

"While it would be a great loss for J&K State to part with such a natural and culturally rich heritage place of Ladakh from its territory, on the other hand it is beneficial to the people of Ladakh to find platform at larger level where it is again also very crucial to be extra conscious of homogenization, a global threat to the cultural heritage," he added.

Nawang Tsering Shakspo, scholar and writer and Mipham Otsal, Sangeet Natak Academy awardee both shared their journey. Nawang Tsering Shakspo appealed not to lose the identity of being Ladakhi and all must consciously take crucial steps to keep the rich culture of Ladakh intact.

Sharing similar views of other experts NSD aluminous Mipham Otsal also appeals to include ‘Theatre in Education’ as part of the school curriculum.

Earlier, Tsewang Paljor, Special Officer for Culture-G1 Culture Academy Leh spoke about valuable contributions of the Academy and also appreciated the contributors in the form of writers, poets, artists, artisans, performers and singers of all art forms for being part of the Academy.

Taking cognizance of rapidly, effortlessly creeping homogenization into our lives, pointing towards auspicious objects of ‘dangyas’, ‘gorza’, and ‘nayopa-rtses’, Paljor elaborated about their symbolic importance and wished for a healthy, wealthy and happy lives of the people of Ladakh in particular and the world in general.
Tashi Rabgyas released a special publication of K-sar saga and JKAACL Leh’s annual publications of ‘Sheraza’.

Ex-employees of the Academy were also facilitated with ‘khatags’.

Ven. Monks of Hemis monastery presented a part of their ‘Chhams’ rehearsals.

Similarly, performance of Achi-lhamo, short-play and folk dances of both Leh and Kargil districts were part of the inaugural function. Various art forms of agricultural tools, sowarigpa, astrology, fortune teller, porter, manuscript, leather-worker and others were on display.

Traditional ‘Manepa’ performance, seminar on contributions of JKAACL Leh in the field of preservation and up-gradation of cultural heritage, language, poetic heritage, and importance of basic ethics of culture in 21st century; artists meet; film screening; musical concert and theatre performance by Theatre Group of Kargil were the main attractions.
Vote of thanks was given by Nazir Hussain, SOCA G1 Kargil.