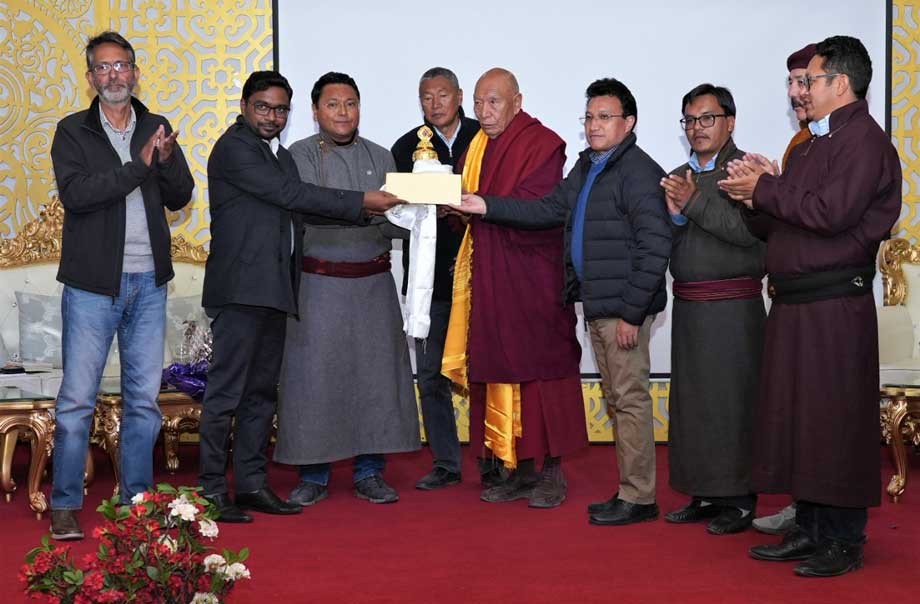 Honouring the legacy of renowned historian and eminent scholar, Late Tashi Rabgias on his 96th birth anniversary, the first Ladakh Literature Day was celebrated on October 17 at Hotel Zen Ladakh in Leh.

Ven Thupstan Paldan, a renowned scholar and author of Ladakh was conferred with the first-ever Ladakh Literary award.

In his keynote address, Ven Paldan expressed gratitude to Hill Council, Leh, and the Administration for recognizing his work and honouring him with the title. He appreciated the step taken by the Hill Council in recognizing Ladakhi literature through the award which would be presented every year from now onward.

Deputy Chairman, Hill Council, Leh, Tsering Angchuk highlighted the contribution of the Late Tashi Rabgias in promoting and preserving Ladakh’s history, literature, art, and culture. He stated that Ladakhis need to revisit Late Tashi Rabgias’s legacy to adopt the literary culture of Ladakh as their identity. Terming Bhoti language as one of the major factors in preserving Ladakh’s unique literature, urged everyone to encourage the younger generation to learn the language.

He informed about various initiatives taken by Hill Council, Leh, which include the installation of bilingual signages at schools, making letters/applications in Bhoti twice a week in schools mandatory, etc.

“Various initiatives, including adult education programmes, funded by the Hill Council, will be implemented during the winter season,” informed Deputy Chairman Angchuk.

EC, Art & Culture, Stanzin Chosphel also congratulated Ven Paldan for being bestowed with the prestigious Ladakh Literary Award. He highlighted Ven Paldan's contribution to the preservation of Ladakh’s literary culture and heritage and further highlighted LAHDC Leh’s vision of celebrating this day as the Literature Day of Ladakh by honoring the legacy of the Late Tashi Rabgias.

Various books published by the Ladakh Academy of Art, Culture, and Languages (LAACL), Leh along with books of other prominent authors were launched by the dignitaries present during the occasion.