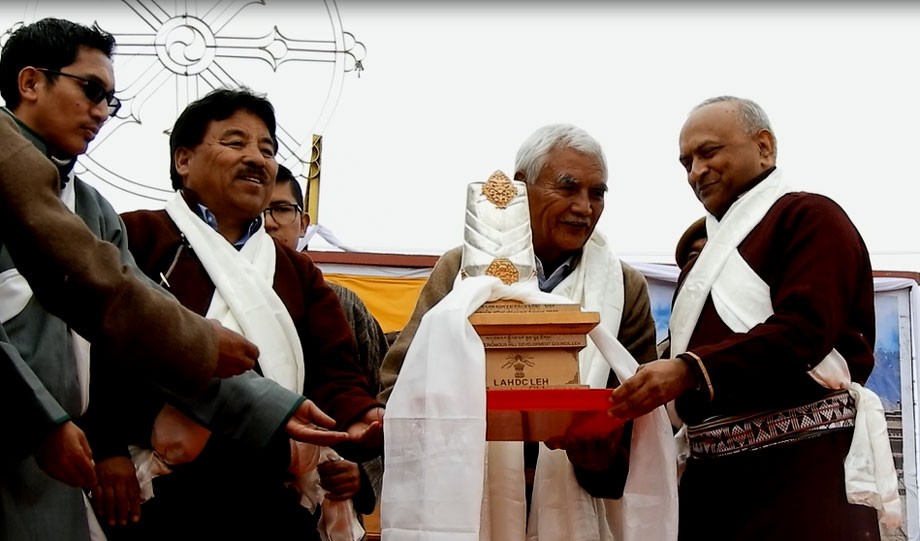 Celebrating the new era of UT Ladakh, the 4th Ladakh dPal-rNgam-Duston was held in a grand way recalling the glorious past and ancient tradition on November 1.

The festival commenced majestically with the portrayal of King Singey Namgyal, ‘The Lion King’ of Ladakh, his queen and mother Gyal Khatoon along with the royal members at Leh palace. A cultural procession from Leh palace till NDS ground was taken out.

Chief Guest of the occasion, Radha Krishna Mathur, Lieutenant Governor, UT Ladakh said, “Today is a moment of pride and glory for each one of us to celebrate this annual festival in UT Ladakh.”

He said that the UT Ladakh has opened up new opportunities and road to development along with many challenges which have to overcome with cooperation and responsibility.
RK Mathur assured to work along with Hill Council to fulfill the demands and aspirations of the people. He said that Ladakh being a UT now, the decision making will be faster with more appropriateness and correctness in the utilization of funds and work implementation.
As the long-pending demand for UT status got fulfilled, people of Ladakh remembered the sacrifices and struggles of people who led and joined the UT movement.

Thupstan Chhewang, Former MP and the torchbearer of the UT demand movement was conferred with Ladakh dPal-rNgam-Duston 2019 award for his tireless contribution and sacrifices made for achieving UT Ladakh status. Also, kin’s of the Late Nawang Rinchen from Sankar, Tsering Stobdan from Durbuk, and Tsewang Dorjey from Saboo were honored. The three brave hearts were martyred on August 27, 1989, during the Union Territory agitation in Leh.

Expressing gratitude to the people of Ladakh on receiving the award, he said, Ladakh being a Union Territory the region has its own identity and scope of development. He said that because of Article 35 A and 370 the development of the region has been hampered. He thanked Prime Minister Narendra Modi and Home Minister Amit Shah for the historic and courageous decision in favor of the people of Ladakh.

He appealed people for unity and understanding the responsibility to make the UT Ladakh a progressive one.

Jamyang Tsering Namgyal, MP Ladakh expressed gratitude to great leaders including Gyalsras Kushok Bakula Rinpoche and Thupstan Chhewang who always thought and worked for the people of Ladakh. Also, he paid tribute to Nawang Dorjay Stobdan who laid down their lives while demanding UT status.

Talking about the rising concern and issues after UT status, he appealed people of Ladakh not to fall under rumours spread in social media. He said that he is giving his best along with Hill council to get what the people of Ladakh deserve.

One of the major highlights of the festival was the unveiling of the magnificent statue of the ‘Lion King’ of the Ladakh, King Singey Namgyal at Skyatsags chowk sculpted by local artist Tsering Gurmet from Kungyam and a black-necked crane at Tourism Department sculpted by Chemet Dorjay from Sakti. Both the sculptor was also honored during the celebration.